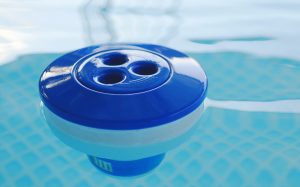 A chemical feeder for a pool can be as simple as a chlorinator, which slowly erodes chlorine tablets, or as complex as a salt system that uses electrolysis to produce chlorine from ordinary table salt. Other types of feeders produce ozone to oxidize and still others produce copper and titanium ions that work as algaecides and oxidizers.

Chemical feeders for pools have become a lucrative market for pool equipment manufacturers. Even though the theories behind the different technologies have merit, the reality is no amount of specialty equipment replaces the physical need to service the pool or the need for an occasional splash of chlorine.

The two most common types of pool chemical feeding equipment utilized in the Austin Metro area are the standard in-line chlorinator and the chlorine producing salt system. Of all the bells and whistles being sold today, these are two pieces of pool equipment that actually have a tangible benefit. They ensure and work by helping maintain a constant presence of chlorine in the pool. Chlorine, by far, remains the most efficient, most effective and least expensive sanitizer and oxidizer for your pool.

A standard in-line chlorinator works by eroding tablets manually placed in the chlorinator tube. A valve controls how much water enters and is released through the canister. The greater the flow of water through it, the quicker the tablets dissolve and therefore the more chlorine is introduced into the pool.

When having an in-line chlorinator installed make sure it is the last thing on the equipment set before going back to the pool. If you have a pool heater, make sure a corrosion resistant check valve is placed directly behind the chlorinator to protect the copper heat exchanger. Also, you should make sure that any suction lines for a cleaner booster pump are plumbed behind the corrosion resistant check valve. An improperly placed chlorinator can cause hundreds if not thousands of dollars worth of pool equipment repairs and damage.

A chlorinator is a simple mechanical device and is very affordable. It is a very good investment that requires only the occasional o-ring swapped out or feeder tube replaced.

Most tablets or sticks typically used in a chlorinator are made of a type of chlorine called isocyanurics. These types of chlorines have a chlorine molecule that is chemically bonded to a cyanuric acid molecule. Make sure to check your cyanuric acid levels every month and waste water directly out of the pool proactively so that you don’t overstabilize your pool.

A pool salt system is another great way to ensure constant chlorine presence in a pool without the highs and lows of a manually shocked pool. The process through which a salt system produces chlorine is called electrolysis.

Salt is made up of sodium and chloride. When saline water passes through the charged plates in the salt cell, the chlorine, which is positively charged, separates from the sodium and is released into the pool water as free chlorine.

One of the biggest cons to a salt system for your pool is the upfront cost. These systems are not cheap and require a licensed and qualified pool technician to properly install. When you combine the cost of the system and the cost for labor to install you would have invested a couple of paychecks. The benefit is 3 to 5 years of chlorine for your pool produced from a few bags of salt and fewer problems.

There are a few things you should consider before installing a salt system for your pool. The first is the misconception that a salt water pool does not have chlorine in it. The salt does not replace the chlorine; it produces chlorine from the salt. Some more food for thought is the corrosive nature of saline water. If you have metallic fencing, metallic pool furniture or metallic doors, the salt will inevitably rust or corrode them and basically ruin your backyard fixtures. The final and most important consideration is one that is rarely mentioned. The most important consideration is the erosive capabilities that salt water has on unsealed coping and decking stones.

Salt is dissolved into the water. Through normal use of a pool, there will inevitably be splash out all the way around the pool and especially heavy traffic areas. When the splash out lands on unprotected stones, it will then absorb into the stones. The water will then evaporate leaving the salt encapsulated in the stone. Eventually enough pressure will form that will break up the stone from the inside out.

Depending on the density of the stones, the irreversible damage can occur as quickly as 6 months. Make sure to seal any stones around the pool if you are installing a salt system, save yourself the headaches.